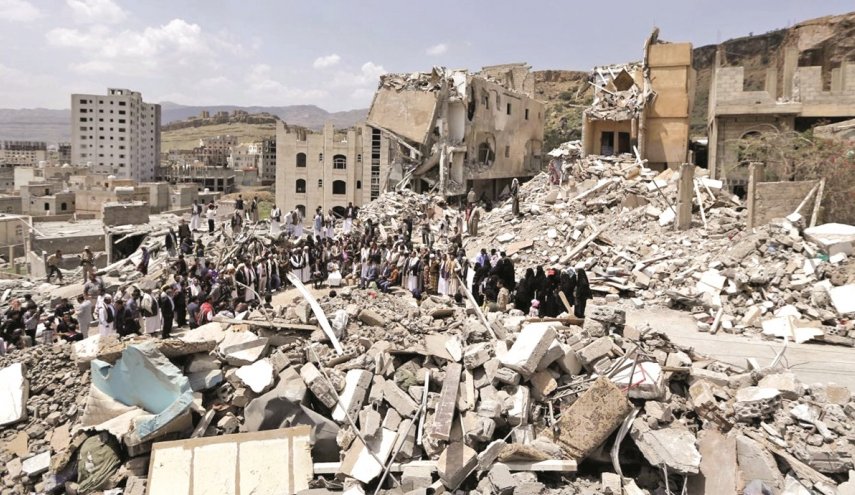 The local mercenaries of the US-Saudi aggression announced their refusal to start the first phase of opening roads in Taiz and other governorates, for they are determined to try to exploit the suffering of citizens to achieve military gains. This proves the unwillingness of the aggressive coalition to implement the terms of the armistice agreement, which is about to enter its last month after its extension without any progress.

Media outlets affiliated with the aggressors spoke to the head of their delegation participating in Amman discussions, the mercenary Abdul Karim Shaiban, who released statements rejecting the remarks recently announced by Sana’a on the proposal submitted by the UN envoy, especially with regard to the opening of two roads immediately, as a first step, to alleviate the suffering of citizens.

On the other hand, a member of the national negotiating delegation, Abd al-Malik al-Ajri, said a few days ago “The rest of the roads proposed by the United Nations need more time to be studied. This is to ensure that they are not used by the coalition of aggression for hostile acts, noting that the basic principles of this file include that the roads be paved and allow the entry of food basics, and do not change the military reality.”

However, the statements of the head of the mercenaries’ team confirmed that the enemy is committed to opening the “Al-Qasr intersection” road only, which is a major contact area that needs a clear agreement not to exploit the road militarily, and that’s what Sana’a had requested during the discussions, but the mercenaries refused. Thus, this clearly reveals their intentions to use the road; In order to achieve military progress and advance towards the free zones protected by the army and the popular committees.

The mercenary Shaiban tried to re-promote the same false allegations claiming that the roads that Sana’a announced ready to open were unfit for use, which activists from the province had denied earlier, as they emphasized that they are paved and are safe roads that shorten the time traveled for the people of this province.

Sana’a had presented an initiative to open three roads in Taiz Governorate as a first stage, which are important roads that would greatly alleviate the suffering of citizens and shorten the time of travel to and from the city, from 5 hours to less than half an hour, but the mercenaries refused to do so. The reason behind their refusal of this initiative is because the benefits that are being reflected on the mercenary factions and the coalition of aggression from the continued suffering of the citizens would end.

It is worth noting that the mercenaries get huge amounts of royalties that they impose on the citizens and trucks on the rough and long roads they control, while the countries of aggression trade this suffering in front of the international community in a misleading way to mobilize positions against Sanaa.

In a clear attempt to exploit the truce to blackmail Sanaa, to achieve military and political gains, the mercenary Shaiban threatened that not agreeing to their suspicious demands regarding Taiz would mean that the aggression would resort to closing Sana’a airport and the port of Hodeidah to “force” Sanaa to implement those demands.

This comparison between Sanaa airport and the port of Hodeidah and the roads in Taiz represents a blatant attempt to circumvent the truce and turn it into a means of pressure. The roads that mercenaries want to open represent a major confrontation line, but Sanaa airport and the port of Hodeidah are humanitarian civil institutions whose closure represents a collective punishment for all the Yemeni people.

The truth is that the mercenary authorities do not have any decision regarding the closure and opening of the port of Hodeidah, Sanaa airport, or the roads of Taiz, which means that these statements and threats clearly translate the orientation of the countries of aggression and their insistence on using humanitarian files as negotiating cards, which completely undermines the content of the armistice.

The United Nations had pledged to work to expedite the implementation of the terms of the armistice and compensate for the late benefits of the agreement to persuade Sanaa to agree to the extension, but the first month of the extension period is almost over without achieving any progress, as the coalition of aggression continues to obstruct flights and prevent fuel ships from reaching the port Hodeidah. It is also still insisting on its intransigent position regarding the opening of roads in Taiz and the governorates, which makes the chances of saving the agreement very slim.

This week, Sanaa warned the countries of aggression of the consequences of continuing intransigence and non-compliance with the terms of the armistice, stressing that the armed forces had renewed their targets in the Saudi and Emirati depths to carry out bulky operations if the enemies did not respond to peace.

The information confirms that the forces of aggression are preparing for military operations on more than one front, and Taiz may be among them, as it has become clear that the focus on the contact areas in the discussions of opening roads comes in order to achieve lightning military gains under the cover of the armistice.

Sana’a: The new military “alliance” of the enemies will lead to massive confrontations in the region