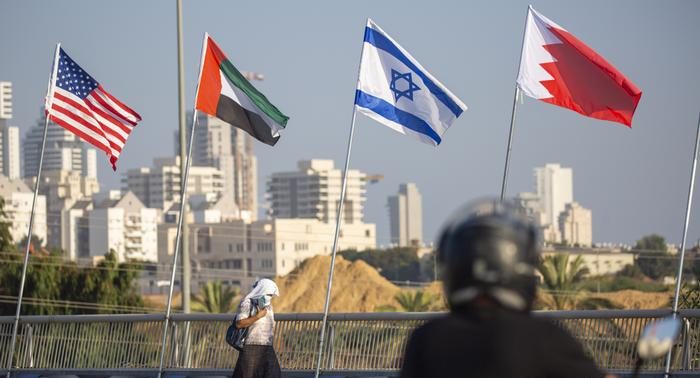 Sana’a: The new military “alliance” of the enemies will lead to massive confrontations in the region

Officials in Sana’a commented on the US-Israeli efforts to form a new military alliance in the region, in partnership with mercenary regimes, stressing that this conspiracy will lead to broader confrontations with the forces of liberation and resistance that will form a united front in return, which will lead to major historical changes.

“Any military alliances in the region will not lead to stability, but to more wars. Stability does not need military alliances in a region where those who ally in it participate in a coalition to destroy the peoples of the region according to an arrogant perspective and aggressive terrorist crimes,” the member of the Supreme Political Council, Mohammed Ali al-Houthi, said.

This is not the first time that talks about the establishment of a new military “alliance” in the region that includes the Zionist entity has emerged. Efforts to form this “alliance” and prepare for it have been going on for years under the title of confronting Iran and the Axis of Resistance. The wave of “normalization” that the region witnessed came in the context of these endeavors.

The United States recently announced the establishment of a “joint” naval military force that includes the countries affiliated with this “alliance”.

Despite what this alliance represents as a vast conspiracy to perpetuate US-Israeli hegemony in the region, it “does not bring anything new,” according to Al-Houthi, explaining that this is because they are using the well-known mercenaries of this region. The countries affiliated with this coalition have already cooperated on several fronts, especially Yemen, and have only achieved total failure.

In this context, Ali Al-Qahoum, a member of Ansar Allah’s Political Bureau, commented, “Saudi Arabia and the UAE have tried, in alliance with the Americans and the Zionists, to return Yemen to their bosom, but Yemen is too big to return to the Saudi and foreign guardianship, and it has proven over 8 years that it is disobedient against the invaders and occupiers, and after the catastrophic failure and successive defeats, they went to renew the alliance and announce it again!”

However, what is new and influential on the scene will be the counter-reaction to this conspiracy from the forces of the Axis of Resistance, whose military alliance among them, in turn, will represent a major historical turning point that may change the face of the region forever. The resistance has achieved several exceptional victories over the alliances of the Western Zionist hegemons and their tools in the region.

In this context, the Deputy Foreign Minister of the Salvation Government, Hussein Al-Ezzi, affirmed that “the ongoing conspiracies against our country and our nation will compel us and all the oppressed throughout the region to put our hands in the hands of each other to confront the arrogance and the dangers of the alliances of the Israeli enemy.”

“Perhaps it is a harbinger of a major revolution and a broader and more comprehensive armed confrontation,” he added.

Today, Yemen is considered a major player in the Axis of Resistance, and the gains of the battle with the aggression during the past years have formed a solid and stable ground for a pivotal regional role that Yemenis can play in any comprehensive confrontation with the forces of Western Israeli hegemony.

Talk about the establishment of the new military “alliance”, coincides with the emergence of more indications of the Saudi regime’s tendency toward public normalization with the Zionist entity, as observers say it is likely that this file will be on the agenda of US President Joe Biden in his upcoming visit to Saudi Arabia, in which he will travel on a plane Zionism from the occupied lands directly to the city of Jeddah.

These efforts clearly coincide with the agenda of the military coalition, as well as with Saudi Arabia’s predicament in Yemen, where Riyadh has been trying for some time to pressure the United States to get it out of this predicament. Oil may not be the only price that the kingdom will pay, but “normalization” may be the main price in the deal.