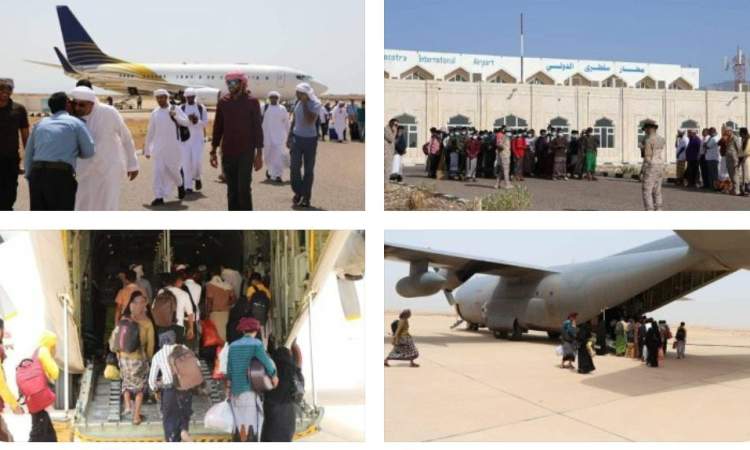 The Saudi occupation forces began yesterday, Saturday, a massive campaign to displace the residents of Socotra, as part of an American-Zionist plan that is being implemented through the Gulf states to transform the strategic Yemeni island into military bases.

According to local sources from the people of the island, since yesterday, Saturday, the Saudi occupation began transferring dozens of Socotra families to their lands, in exchange for having a permanent residence under the condition that all family members leave.

The sources confirmed that Saudi military cargo planes have already started operating flights between Socotra and Dammam, where pictures from social media show Saudi soldiers packing the belongings of Yemeni families from the island’s residents prior to their deportation.

On the other hand, Tariq Salam, Governor of Aden, appointed by the National Salvation Government, revealed the presence of 6 promising oil sectors on Socotra Island, in addition to its important and strategic location in the region, which America and its axis seek to control.

Salam explained in a statement to the Al-Masirah channel, last Saturday, that Socotra Island is far from confrontations, despite that, the coalition of aggression seeks to displace the Yemeni population from the archipelago and abolish all Yemeni manifestations in it.

“We are concerned with liberating every inch of our land, and we promise our people in Socotra that we will support them in resisting the occupation and forced displacement,” the governor of Aden added, noting that holding on to the land is holding on to existence and the future. He also stressed that everyone must help the people of Socotra and all governorates in facing the occupation.

This campaign comes a day after the Emirati occupation began a massive displacement campaign against the residents of the occupied island of Abd al-Kuri, in confirmation of an American direction through tools to transform the strategic Yemeni islands into military bases that serve America and the zionoist enemy and their tools.

The Ministry of Fisheries has held the United Nations and the international community responsible for the repercussions resulting from the new movements in the Yemeni islands, stressing that the national side will not stand idly by.