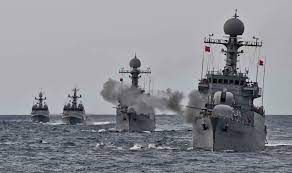 The drills come after a day after the DPRK allegedly launched a short-range ballistic missile into the Sea of Japan, according to South Korean news agency Yonhap, citing the Joint Chiefs of Staff (JCS).

The drills will take place over the course of four days and are aimed to demonstrate the allies’ “powerful resolve to respond to North Korean [DPRK] provocations” and advance their ability to conduct joint naval operations, according to a statement from the South Korean navy.

Earlier Tuesday, former US Navy captain and analyst Carl Schuster revealed that the US navy’s most advanced surface warship, the USS Zumwalt, is conducting a mission in the western Pacific that might pave the way for the future stationing of US hypersonic missiles in the area.

According to Schuster “The presence of a stealth warship will draw a great deal of [Chinese] interest,” particularly if the Zumwalt is armed with hypersonic missiles.

The USS Zumwalt is one of three multi-mission guided missile destroyers in a class that the Navy claims would “create a new level of battlespace complexity for potential adversaries.”