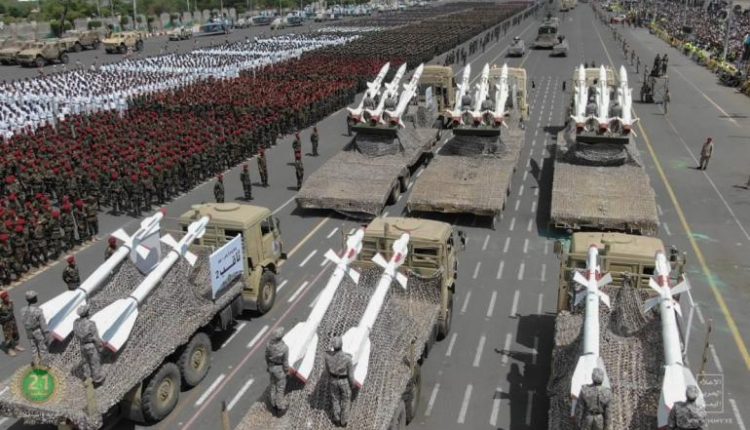 Defense Minister: The armed forces are committed to protecting Yemen’s coastal waters and wealth, and will not allow anyone to endanger them

The Minister of Defense, Major General Mohammed Nasser Al-Atifi, urged everyone to be more vigilant, and be on constant readiness to defend the homeland and the great values ​​of the Muhammadiyah message.

Major General Al-Atifi said: Today, we are at a great historical turning point, and we have harnessed ourselves and our capabilities to be at the forefront of the confrontation processions against the arrogant Zionist project in the region, and we will spare no effort in possessing the capabilities, resources and methods that provide us and march with confidence in these blessed processions.

In a speech during the ceremony organized by the Ministry of Defense and the Presidency of the General Staff, yesterday, on the occasion of the Prophet’s birth, Major General Al-Atifi stressed that the lands, waters, seas and wealth of the Republic of Yemen are the basis of Yemeni sovereignty, and the armed forces are committed to protecting them, warning it will not allow anyone to touch them or even discuss them from a distance.

He added: “Everyone must understand that sovereignty should not be neglected as long as our arteries continue to flow with blood and our hearts beat with loyalty and are loyal to Yemen.”

These statements came hours before the end of the truce; Because of the intransigence of the forces of the US-Saudi aggression in paying the salaries of state employees and adhering to the entitlements of the Yemeni people.

Many questions arise here about the post-truce scenarios, and whether the military escalation can return to the fore, or will the aggression acquiesces and abide by the conditions of Sana’a.

Military expert and strategic analyst Colonel Mujib Shamsan says: In light of the intransigence of the forces of aggression to achieve peace in Yemen, things are moving towards the military option, noting that Yemen has the ability and will to obtain its rights, and therefore, the wealth that is looted by the coalition of aggression, like gas and oil, and others, are all will be considered in the retaliating operations against the aggressive coalition because the Yemeni people cannot remain besieged and deprived of their rights in the face of continuous looting of their wealth and a siege imposed on them by air, land and sea.

In an exclusive statement to Al Masirah newspaper, Shamsan affirms that “the Yemeni armed forces are present and the statements of the Minister of Defense confirm that they will spare no effort in defending Yemen’s sovereignty and its land, sea, and regional wealth in terms of geography or in terms of the wealth that continues to be looted,” pointing out that the response will be military. He emphasized that the retaliating attacks will focus on the backbone of what is supplying this war to continue and provide financial support.

On ground, Shamsan points out that the indicators confirm that the enemy is heading towards the main fronts, such as the West Coast front, which is one of the most important fronts that the Zionist entity seeks to secure. As it constitutes, from their point of view, as a front that represents an existential threat to its interests in the Red Sea. Other vital fronts include those with high energy sources, noting they could be from the most flammable fronts; As it represents strategic importance for Sana’a in the face of the ambitions of the coalition of aggression, or in terms of the need that the coalition of aggression seeks to continue controlling it as sources of energy wealth and the various Yemeni ports and the Bab al-Mandab strait and its islands overlooking.”

In turn, the military expert and strategic analyst, Brigadier General Aziz Rashid, says: “The military and political expectations, in light of the ongoing consultations with the coalition of aggression by the national party, and what the leadership’s statements in Sana’a indicated, confirm that foreign companies that continue to loot Yemen’s oil and gas wealth must take serious safety measures and reconsidering their political position to obtain concessions to explore and continue in Yemen, which will not obtain, as long as they don’t listen to the warnings of Sana’a.”

In an exclusive statement to Al Masirah newspaper, he added that these companies should take the warnings very seriously.

On the military level, Rashid believes that Yemeni missiles, naval and air weapons that can target aggressive ships that continue to loot Yemen’s wealth, will be activated accurately, knowing that Yemeni weapons have become highly developed and possess all destructive capabilities and radar detection for all ships loaded with Yemeni oil and gas.

The military expert Rashid points out that strategic options for responding to the coalition of aggression will be determined by the leader of the revolution, Sayyed Abdul-Malik Badr Al-Din Al-Houthi – may Allah protect him – during his upcoming speech during the anniversary of the Prophet’s birthday, and everyone will know the place and time of the appropriate response,” indicating that the expected response of the Yemeni armed forces will be very painful, and then the forces of aggression will have no choice but to acquiesce and implement the demands of Sana’a, which seek to alleviate the suffering of the people.

Regarding the most prominent military options for Sana’a, the strategic analyst Rashid said: “Sana’a possesses a large map of sensitive and strategic targets in the depths of the countries of aggression and has the military ability to destroy them, and it will be painful, and that the internal fronts will all be targeted as well.”