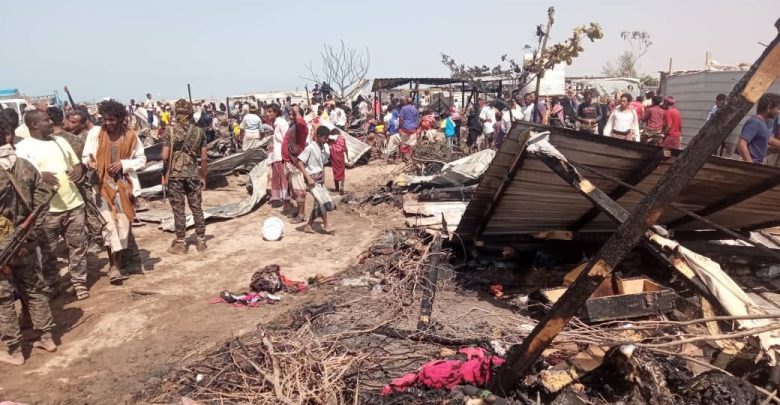 The issue of the displaced in the areas under the control of the Emirati-Saudi occupation is the center of attention once again, not because of the humanitarian services provided to them, but rather as a result of the spread of rape against women in those camps.

The true picture reflects the indescribable suffering of the displaced who live in camps in the south of Al-Hodeidah Governorate under the authority of the traitor Tariq Afash, as the international organizations there provide only a small amount of aid, which does not secure a source of decent life for them, and reports indicate that the soldiers of the traitor Tariq Afash practice Extortion of displaced women from time to time, instead of extending a helping hand and rescuing them from this quagmire.

A video clip circulated two days ago revealed one of the most prominent scandals of the United Nations and its affiliated organizations in Yemen, and its role in providing “humanitarian aid” to the displaced. Instead of providing the basic needs for those displaced people, the UN is distributing sex-related pills and tools. This reflects the reality of these organizations and their identification with the US-Saudi aggression against Yemen.

One of the displaced women in the camp talks about the reality of what they are exposed to by officials of the executive unit of the camps for the displaced and workers in the organizations, as well as the forces loyal to the UAE occupation. In the video circulating with burning sensation, stressing that the disbursement of relief organizations is limited only to the special requirements of women and special things to facilitate their night affairs, according to the woman, referring to the distribution of sex tools. She also said they are subjected to harassment, assaults, attacks and attempts to rape by workers and soldiers.

This video is considered one in a series explaining the circumstances of the burning of the camp for the displaced in Al-Khawkha, and it is one of the scandals that the mercenaries publish to clarify the truth about the tragedies that are going on there affecting the displaced people who fled from the wrath of aggression to the hell of the organizations and forces of the traitor Tariq Afash, who is a loyal mercenary to the UAE occupation.

Journalist Ahmed Al-Nami, who prepared these videos, says: “They watched one of the cases of extortion and exploitation of the honor of the displaced women in such camps. This girl spoke many things and names of people who have committed these assaults.

He adds, “The moral corruption of the organizations, which is supervised by the director of the executive unit of the camps for the displaced, Najeeb Abd al-Rahman al-Saadi, distributes sexual tools to the displaced. Ar night, UAE-affiliated soldiers and others sneak into the women’s tents at night to practice sexual assault. The most targeted women are those whose relatives were killed in the war and left without a breadwinner.”

Moreover, he noted that from the documented stories of these victims were girls who were forced to accept these assaults, because they were driven by the need for money.

This is not an exceptional case in which those responsible can be held accountable, but it comes among many cases that reveal a systematic plan by the aggression and mercenaries and in identification with international organizations to deepen the tragedy of the displaced in Yemen.

Many of the displacement camps in those areas lack many things, such as toilets, which are scare to find, and the majority of them no longer work. Each family owns one tent, which turns into a kitchen for preparing meals, and a place to sleep for all the family.

One of the displaced women says in an interview with one of the mercenary media outlets: She feels ashamed whenever she goes to the toilets in front of most of the camp’s residents, as it is no longer a secret to anyone that when a woman leaves her tent accompanied by a jug of water, she goes to the “bathrooms” that lack the minimum necessities of public health.

She continues, saying: “The camps have destroyed our privacy.” Yemeni women are very conservative, and do not have the courage to live their lives in public normally. Therefore, we feel embarrassed when we go to the toilets, in front of a crowd of camp residents, and we cannot resist the feeling of shame,”

The woman explains that her life has become open to the public, everyone knows her and follows her details carefully, as privacy no longer exists today.

She concludes that women in the camp face the biggest difficult conditions that surround the life of displacement and poverty, in conditions that do not take into account their privacy or the nature of their social life.

So, if this is the true situation of women in the displacement camps in the areas of the traitor Tariq Afash, then what is the point of distributing sexual tools to women who do not find the most suitable place for toilets?

Perhaps the most appropriate explanation is that the United Nations organizations are well aware of the extent of the suffering of the displaced in the camps scattered in most of the governorates of the Republic, but this behavior is deliberate by them, which is mainly in the service of the Saudi-UAE aggression.
Moreover, they are seeking to implement dirty goals that many are ignorant of, and it is a behavior that it is being practiced since the past seven years in its dealings with humanitarian issues in Yemen.

During the past years, multiple sexual assault by soldiers affiliated with the traitor Tariq Afash have spread to the public, including the rape of women in areas under their of control, as the rape story of the Khawkha girl. This comes in parallel with the continued security chaos in the occupied territories and the continued exposure of women to kidnapping and enforced disappearance by mercenaries and leaders of the countries of aggression.

In this regard, the human rights activist Somaya Al-Taifi says: What is happening in the areas of the traitor Tariq Afash is not a single crime, but rather thousands of crimes, but unfortunately there is silence about that because of customs and traditions, or for fear of death and torture at the hands of the tools of aggression and those who commit the most heinous violations against women.

“We will not forget the crime of rape of a Sudanese soldier belonging to the UAE occupation forces, a woman in the Al-Khawkha district while she was in one of the valleys adjacent to the camp of Abu Musa Al-Ashari, which belongs to the coalition forces, just as we will not forget the crimes of aggression against women in the Al-Tuhayta district. This directorate witnessed multiple brutal rapes, and the mercenaries kidnapped a group of women in the district and took them to an unknown destination.

The rape of women in mercenary areas and the spread of this crime in support with international organizations remains one of the most important files that call for widespread popular action and anger, and not to remain silent at all, so that the enemy does not persist in committing more crimes that violate the honor and dignity of Yemenis.

Shabwa Governorate Undersecretary for Oil and Gas Affairs: Oil companies in the occupied governorates are living in a real predicament

Yemeins condemn the burning of copies of the Holy Quran