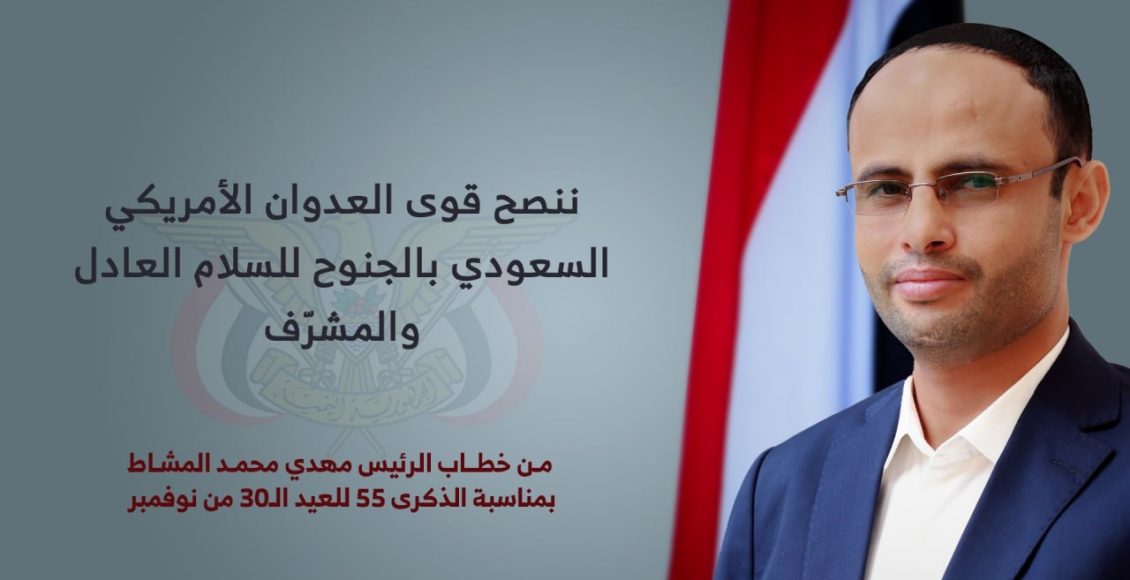 The President of the Supreme Political Council, Mahdi Al-Mashat, reaffirmed the firm position to protect the Yemeni land, and prevent the plundering of oil and gas wealth, for this is the correct and the logical legitimate behavior.

In his speech on the occasion of the 55th anniversary of Independence Day, November 30, President Al-Mashat affirmed, “This right does not mean any threat to international navigation, as the aggression claims. The ones really threatening international navigation are who continue their aggression, blockade, and plundering the wealth of the people.”

The president once again denounced the aggressive efforts to plunder Yemen’s wealth and deprive the people of their natural rights, foremost of which is the payment of salaries to all Yemeni state employees from oil revenues, which is considered a non-negotiable matter.

“Our people will not stand by and watch as their wealth is plundered before their eyes.” They are suffering the most severe siege imposed on a people in modern and ancient history,” President al-Mashat noted.

He advised the forces of the American-Saudi aggression to accept a just and honorable peace, stressing the need to expedite paying the salaries of the Yemeni people without procrastination.

President Al-Mashat said, “This day distinguishes between the free patriot, who sided with their country and their people, and the traitorous mercenary, who sold his country cheaply and allied with the American and British occupiers, and placed themselves in the pages of historical shame.”

He extended his congratulations and blessings to the leader of the revolution, Sayyed Abdulmalik Badr Al-Din Al-Houthi, members of the Supreme Political Council, the National Salvation Government, all scholars, sheikhs, notables, and the Yemeni people at home and abroad on this occasion.

He expressed regret that this occasion comes while the Americans moves between the occupied provinces, and being the one in charge of those provinces under occupation, accompanied by his soldiers, in a repeated scene that has not been absent from the memory of the Yemeni person since the old British colonialism. Not only that, but the occupier today is more arrogant, insolent and daring, to the extent that it allows itself to interfere in the affairs of the country in every council and forum to condemn and denounce what is in its interset.

Presient Mahdi Al-Mashat pointed out that the occupier believes that the Yemeni people’s defense of the looting of its own wealth is a wrong measure for them and their interests, in a sense of insolence that an occupier before him did not dare. However, at the same time, the Yemeni people’s determination increases to move forward in the path of liberation and independence and the re-expulsion of the new colonizer so that Yemen can achieve its freedom, independence and sovereignty over all its lands.